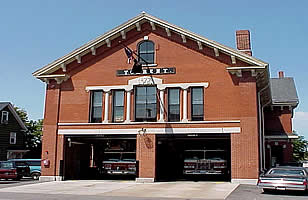 This Fire Station was built in 1877 and is the home of Engine 2 and Ladder 2.

The origin of the name "Torrent" dates back to the 1840s and comes from the amount of water the steamer could pump-Torrents of water.

The station has been renovated several times over the past 123 years and received a Preservation Award in 1997 from the Commonwealth of Massachusetts. It is known as "The West Point" of the Lowell Fire Department.

Captain B. Dowling is the company commander.