The original design of the City of Lowell's City Seal has been attributed to various committee members including Mayor Elisha Bartlett, two of his selectmen, Seth Ames and Alexander Wright, and two of his counselors, Horace Howard and Stephan Mansur.

During the establishment of the ordinances of the City of Lowell issued in 1836, Chapter 33, Section 1, states that "The design hereunto annexed shall continue to be the device of the city seal, with the motto and inscription thereon."

Several similar but slightly different seals appeared in various City publications and newspaper notices until 1891 when an "official" seal was needed for the construction of the new City Hall. The Commissioners decided to use the one recognized by the ordinances (Chapter 33, amended and adopted 1876 ordinances). 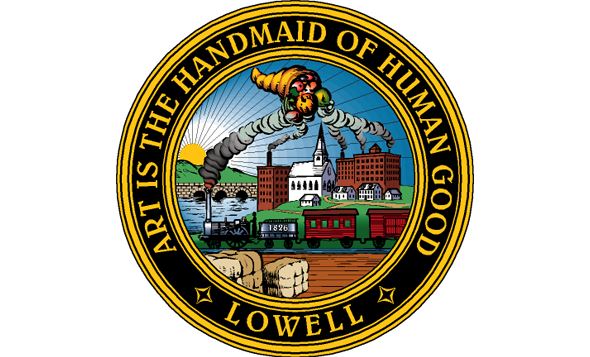 Symbolism of the Design

Centered on the Seal is a mill from whose chimneys are rising black clouds of smoke into a "horn of plenty," intended to signify that Lowell's mills are the foundation upon which her prosperity rests. At the bottom is a train and bales of cotton, signifying the cotton trade which led the City to become known as the "Spindle City." At the left is the Merrimack River across which a bridge has been built; this is the Old Pawtucket Toll Bridge built in 1792. The Seal bears the inscription "Art is the Handmaid of Human Good," which means that "Skill walks hand in hand with the good of the people." The actual origin of the motto inscribed is unknown.