Due to construction of the garage on 330 Jackson Street, Middlesex Street will be closed from Canal Street to Thorndike Street starting October 11 until October 28. Drivers can detour as follows:

When coming northbound on Thorndike, go east (right) on Appleton Street or Jackson Street as an alternative.

Canal Street will have intermittent closures. Drivers can detour as follows: 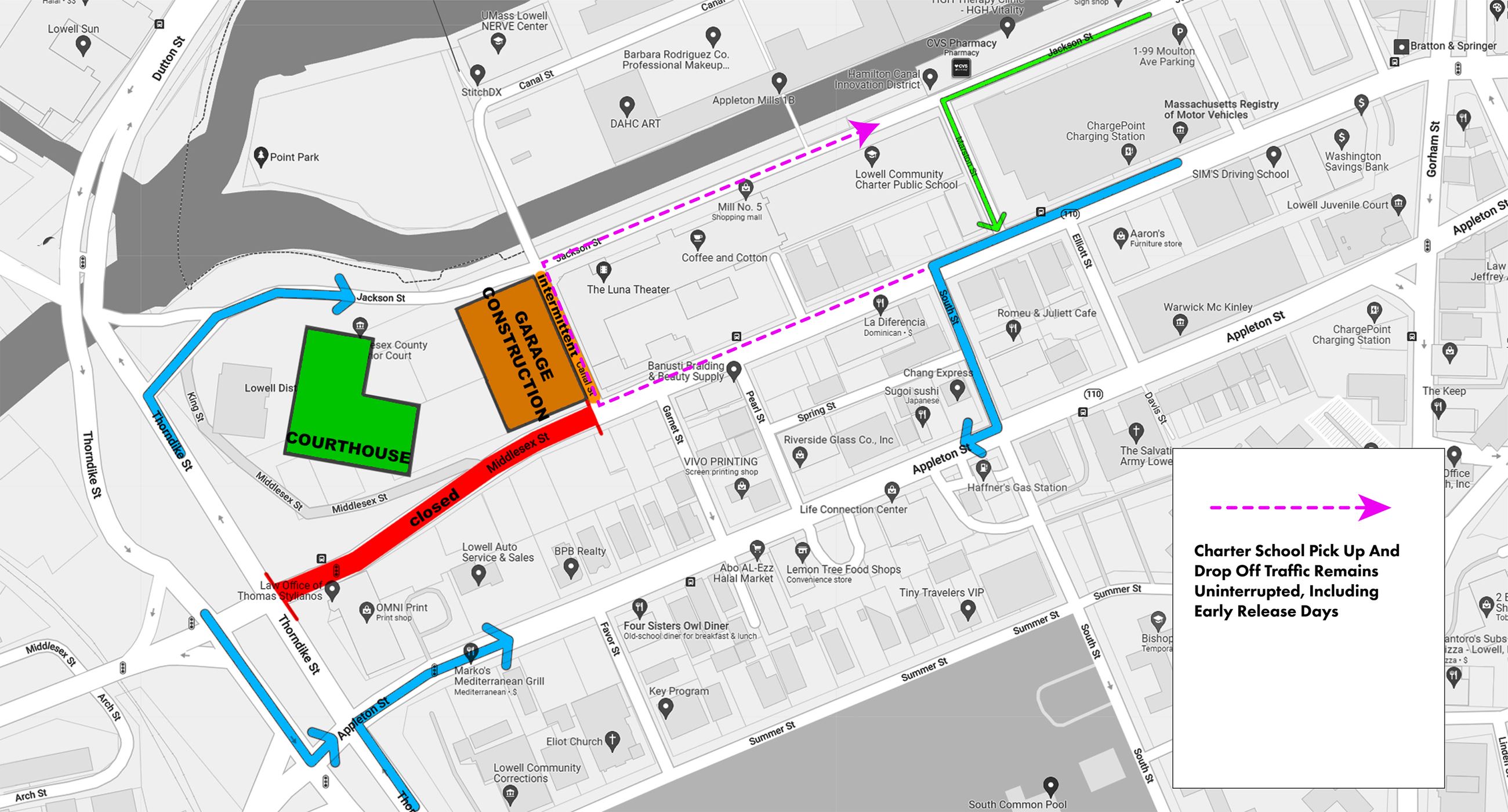 Canal Street will be open daily during Charter School drop off and pick up times, including early release days.

The project will rehabilitate and replace a network of critically important bridges over several canals in Lowell, in order to eliminate weight restrictions that currently interfere with transportation circulation and access in the downtown area.  To learn more about the TIGER Bridge Project, visit our Lowell Canal Bridges Project page.

This project will build two new streets and install utility infrastructure in the northern section of the HCID.  The project includes major pedestrian and traffic improvements to the bridge at Dutton and Broadway, and construction of a new Signature Bridge over the Pawtucket Canal that will connect the north and south sides of the HCID. Newport Construction remobilized to the site this spring to complete minor punchlist items. All work, including minor lighting and railing changes to the signature bridge will be completed in the coming weeks. As of now, we are working with Atlantic Bridge & Engineering, (the contractor installing the railings and lighting) to set up a final installation date. Since Winn Development is done with their work, the bridge is now open to circulation pending additional safety and guiding signage around the area. VHB provided signage recommendations, which are currently being reviewed by the City before deciding on the bridge opening. That decision will be made in the next couple of weeks.

This transformative infrastructure project will remove the aging overpass bridges, connect Jackson Street to Thorndike Street, improve the intersection at Dutton/Thorndike/Fletcher/Jackson streets, and update traffic signals to effectively move travel into and out of the HCID and Downtown Lowell. At this point of the project, the two existing bridges have been decommissioned and all surfaces have been constructed to final alignment. Paving was completed the week of 11/22/21 and Middlesex Street has been opened to thru traffic and moving into Phase 4 of the project. This new phase, attached to this memorandum for reference, will provide improved traffic flow through the area. The primary construction focus for Phase 4 will be the bridge modifications to the Dutton/Thorndike Bridge over the Pawtucket Canal. In spring 2022, work will begin on the final streetscape, bus lanes, biobasins, etc. Phase 5 will include the bus lane construction. Construction is scheduled to be substantially complete in November 2022. Visit our Lord Overpass page for more project information. 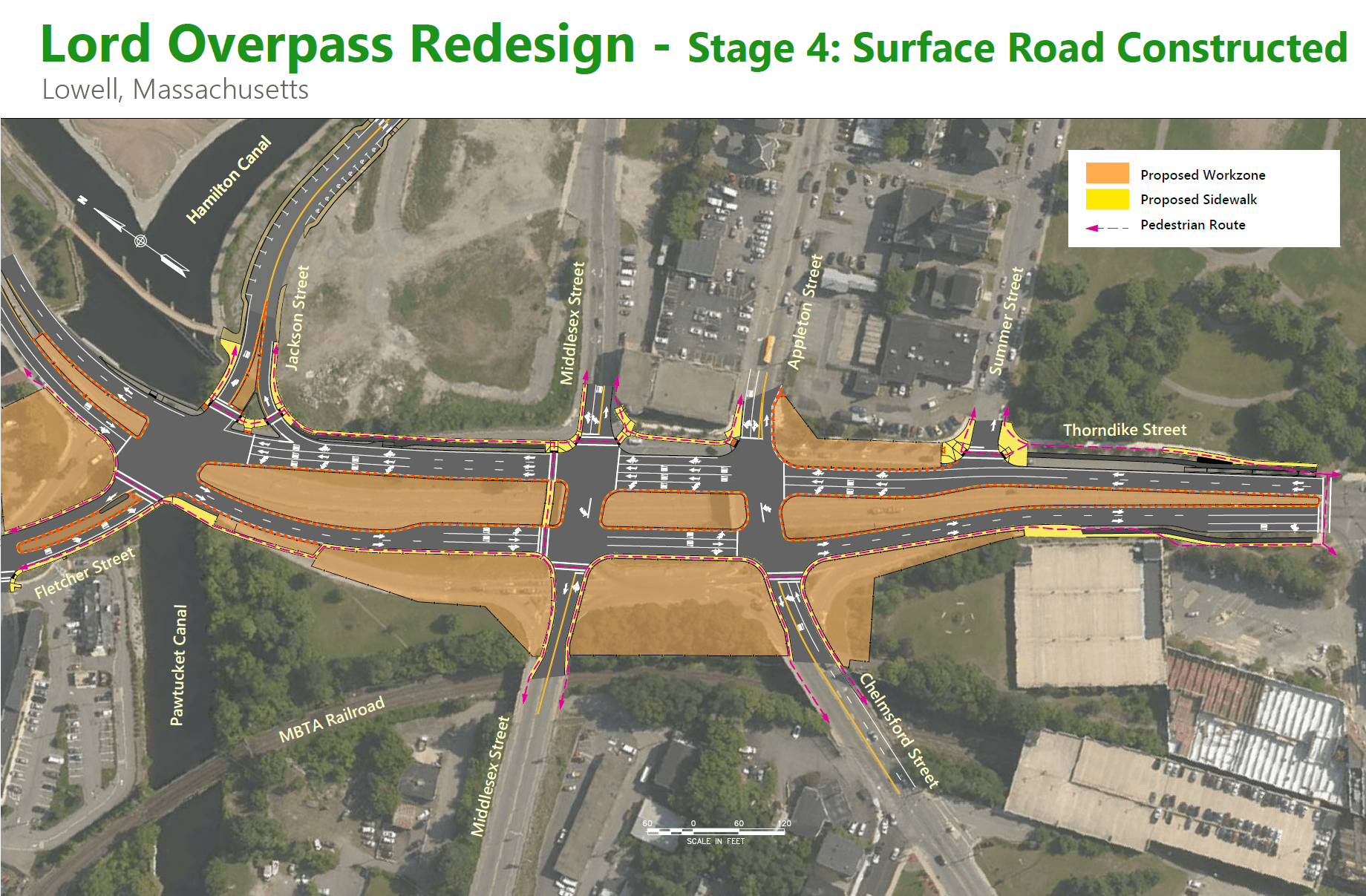 This project will extend the Merrimack Riverwalk under the Bridge Street Bridge, behind Massachusetts Mills, and over the Concord River to a new terminus in front of Lowell Memorial Auditorium via a new pedestrian bridge. The pedestrian bridge over the Concord River was installed in early October. The work area in front of LMA has been significantly reduced as work is now focused mostly on the interceptor along the river. A majority of the remaining work for the Riverwalk Project is limited to the interceptor area and should not cause traffic or pedestrian disruptions. Work on the interceptor will continue until a winter shutdown is necessary. Next spring contractors will finish off remaining work including landscaping, tree plantings and monument reinstallation in front of LMA. At this time we are anticipating a summer 2022 opening for the Riverwalk.

This project will connect two existing portions of the Concord River Greenway from the Jolene Dubner Park and over the Concord River to the Lawrence Street portion of the greenway. The contractor, MAS Building and Bridge, resumed work in the spring. The project experienced a slight delay due to bridge fabrication issues, but those have been resolved and work has resumed. Bridge #1 installation was completed on 8/19/21. Bridge #2 installation was completed on 10/20/21. Final landscaping and tree replacement will be completed in spring of 2022.

Kodiak Corporation has completed bridge rehabilitation of the bridge. Bridge was opened to traffic on July 8, 2021. Kodiak is preparing as-built plan for review and record.

The Pawtucket Boulevard road diet pilot was removed in October, and the road is back to the normal eastbound two-lane road. MassDOT is currently studying the impact of the road diet pilot on vehicle speeds and traffic volume on Pawtucket Boulevard. This data, along with the feedback gathered during the project, will inform long-term planning for the roadway and options to reduce speeding and increase convenient, safe, and pedestrian-friendly access to the river.

The flex posts in the pilot around Cardinal O’Connell Parkway and in front of City Hall are set to be removed in the month of December prior to the first snowfall. The painted curb extensions, island, and bus stops will remain. The curb extensions and drive lane changes, among other pedestrian safety adjustments, have received general positive feedback. This feedback and other data collected will hopefully contribute to making some or all of these changes permanent at a later date.

A minor project to improve safety and remove deferred maintenance will commence this spring. DPD, in coordination with DPW, is working on the upgrades and improvements to the John F Kennedy Civic Center, including the transformation of selected sets of stairs into planting areas. DPD coordinated with LPD and Cultural Affairs & Special Events on the specific areas to remain open and closed for increased safety, security, and usability.

This project, consisting of stairs and landscape improvements at the JFK Civic Center Plaza in front of City Hall, is currently in final engineering phases and will proceed to bidding later in the month in December to secure a builder to begin work in the spring of 2022. The engineering phase includes structural details, construction methods and costs estimates.

This project will create a multi-use path that connects the Bruce Freeman Rail Trail in the Cross Point towers area with the Target shopping plaza along Plain Street. Currently, we are waiting a final access agreement to continue the final paving phase of the project which will resume in the spring of 2022 by the contractor, Belko Landscaping.

Cape and Island Corporation (CIC) will be performing the track resurfacing work. DPD, Parks, and LHA Athletics met with CIC and project designer Huntress Associates in May for a kick-off coordination meeting. Before CIC begins work DPW will remove large pine trees along the front edge of the stadium; that work will begin on 6/28. The needles and sap from the pine trees negatively impact the track surface and drainage and the decision was made to remove them before the new track is installed. Once trees are removed work on the track will begin on 7/12 and the track will be ready for use by mid-August.

Phase 1 of the $343M project, which includes construction of the gymnasium began fall of 2020 and is expected to be completed in the spring of 2022. Phase 2 will then begin with the demolition of the old gymnasium and construction of a new five story freshman academy, main entrance and cafeteria. The entire project, comprised of four phases is expected to be completed in the fall of 2026.

The basement of the 1922 building experienced a flood in June that required extensive renovations throughout the entire 44,000 sf space. A large amount of the rooms were renovated ahead of the school year and the band and chorus rooms were renovated and turned over for occupancy in October. This project is going through project closeout.

Stanley Roofing has been awarded the Freshman Academy Roof Replacement Project. This includes a full roof replacement and replacement of rooftop exhaust fans. The $1.2M project will begin construction in spring/summer 2022. There is a long lead time on roofing materials, which are being procured this winter.

This project consists of heating hydronic piping and uninvent replacement to restore and provide better controls for heating within 14 classrooms at the Reilly School. Gaffney Corporation has completed hydronic piping replacement to restore heat to univents that were not working in previous heating season. The univents which will provide better heating controls are on backorder and are anticipated to arrive in January 2022 for installation.

In addition to the above mentioned projects, there are ongoing construction projects by municipal and private utility companies.  Traffic management considerations for these smaller projects are evaluated in conjunction with the larger projects mentioned above.

The facility under construction will house the Superior, District, Probate & Family, Juvenile and Housing Courts of Middlesex County.  A Court Service Center and office space for both the District Attorney and Registry of Deeds will also be provided. Lowell Justice Center project website

This work includes full bridge replacement (both sub and super structure replacements). The contractor has completed Phase 1 and Phase 2 of the bridge reconstruction. Drainage and Roadway improvements are complete with pavement placed to Binder grade. The Contractor will reconstruct the median island along VFW Highway during the winter of 2021/2022 and final top course paving and traffic markings to be completed in early spring 2022.

MADOT’s contractor, S&R Construction, began bridge rehabilitation work in January 2020. Work on the superstructure continues. The project us substantially complete with final paving, pavement markings, and punchlist items to be complete in spring of 2022.

The City’s contractor, Sunshine Paving, will begin roadway and sidewalk reconstruction on the following streets in 2022. Value of contract is about $1.7 million dollars.

The City is currently preparing a miscellaneous sidewalk replacement project. The focus will be to replace pedestrian ramps throughout the City in areas adjacent to municipal buildings, schools, or within the downtown area. This project will be put out to bid this winter and construction is anticipated to begin in the spring. Estimate contract value of $1.0 million dollars.

Per MADOT’s recommendation, the City closed the bridge to vehicular traffic as a result of findings in a 2019 bridge inspection report. The bridge remains open to cyclist and pedestrian traffic. The design of the bridge rehabilitation has been completed and will go out to contractor for bidding this winter. With the newly approved FY22 funding appropriation of $3 million, the City anticipates construction to begin in spring 2022.

Visit the MASSDOT website for information about the projects listed above.

This project - completed on December 16, 2020 - constructed a 900 space parking garage to support public and private development in the Hamilton Canal Innovation District.  The completion of the $38 million city-funded facility marks a significant and long-anticipated milestone in the development of the Hamilton Canal District and represents the district’s first completed ground-up construction project. The garage is considered to be a critical component in supporting future development throughout the 15-acre district. 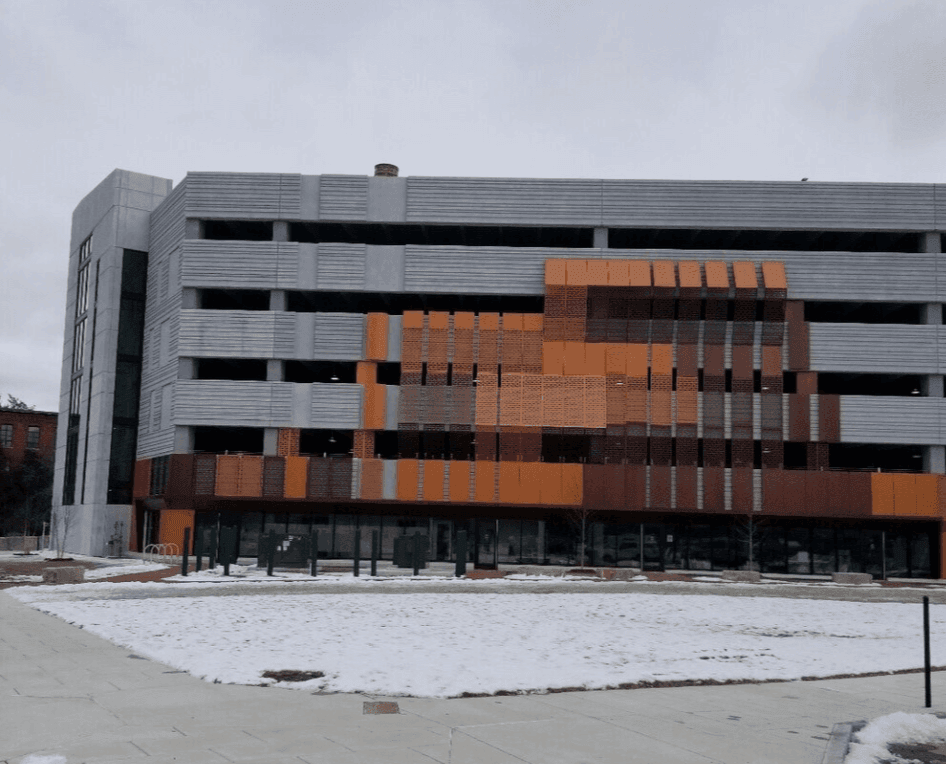